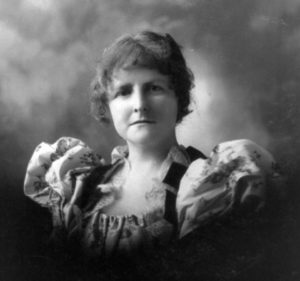 As part of the Words Project, the Festival presents the story of 19th Century Brattleboro author.

Mary Wilkins Freeman (1852-1930) was born in the small New England village of Randolph, Massachusetts, located about fifteen miles south of Boston, where she lived until the age of fifteen. Her father, an unsuccessful carpenter, moved the family to Brattleboro, Vermont, in 1867 and took part-ownership in a dry-goods business. Upon graduating from high school Freeman entered Mount Holyoke Female Seminary in 1870. She left after only a year, however, and completed her formal education at West Brattleboro Seminary. In 1876, following the failure of her father’s business, Freeman’s family, virtually impoverished, moved into the home of a local minister where her mother worked as a housekeeper. With the death of her mother in 1880 and her father three years later, Freeman found herself alone and left with an inheritance of less than one thousand dollars. She moved back to Randolph the following year and lived for the next decade and a half in the home of a childhood friend.

Freeman had started to write children’s poetry and short fiction for adults in Vermont, but her career as a serious writer really began in 1882 when her tale “Her Shadow Family” appeared in the Boston Sunday Budget. With the publication of her story “Two Old Lovers” in Harper’s Bazaar in 1884, her writing caught the attention of major literary figures, including W. D. Howells and Henry James, and it was suddenly in high demand by both editors and readers of the country’s finest magazines. In 1887 she published her first volume of short fiction, A Humble Romance and Other Stories. Freeman then followed in 1891 with A New England Nun and Other Stories, arguably her best collection. She wrote more than a dozen novels, among them Pembroke (1894) and The Portion of Labor (1901). At the age of forty-nine, Freeman married Dr. Charles Freeman and moved to Metuchen, New Jersey. The marriage was happy for a short while until her husband’s heavy drinking turned destructive. Eventually she would be forced to commit him to the New Jersey Hospital for the Insane. Freeman continued to write prolifically into the 1920s, producing a total of twenty-two volumes of short stories and essays, more than a hundred uncollected stories, fourteen novels, eight children’s books, three collections of poetry, three plays, and even a film script. In 1926 she was honored with W. D. Howells Medal for fiction and elected to the National Institute of Arts and Letters. Freeman died of a heart attack in 1930 at the age of seventy-eight.

Thursday, September 19, 6 PM “Revolt of Mother,” film and discussion. Father is going to build a new barn but Mother (Academy Award nominee Amy Madigan) wants the new house she’s been promised. A simple story, yet one that reveals so much about love and respect and the often difficult times between those who strive and work to build a life together. Set against the beautiful rustic backdrop of farming life in 1890 New England, Mary E. Wilkins Freeman’s poignant story brings us two hard-working people of the land. Sometimes the most difficult thing to see may be the needs of those who are closest to you. (47 minutes). Discussion following film led by Jerry Carbone, Don McLean and Sandy Rouse. Brooks Memorial Library.

A copy of the short story will be available at the library’s circulation desk to read beforehand, and anyone may download a copy of the story for free at brattleborowords.org/mwf

Thursday, October 17, 7 PM, Brent Kendrick, author of “Infant Sphinx: The Collected Letters of Mary Wilkins Freeman,” and Christopher Benfey, author of the forthcoming book If: The Untold Story of Kipling’s American Years. A 1.5 hour talk and discussion of these two famous authors who both lived in Brattleboro area for a short time and knew one another.